Today is the 18th anniversary of the release of Rick Springfield’s “Karma” CD, which is very significant in RS history because it marks the return to his touring after a hiatus of more than a decade.

What is especially cool about this (to me, anyway), is that I was there when it happened! Because I wasn’t up on my RS history at the time – or when I started writing this blog – I didn’t realize that the day I first met him was the exact day “Karma” was released (and the day he signed my copy of “Karma”). 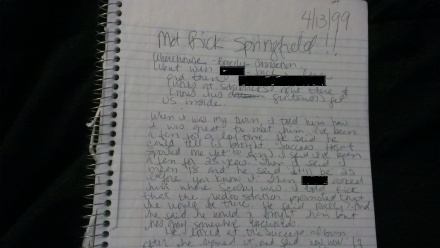 Here are two of my past blog posts about that day: “Rick’s Return” and “Meeting Rick Springfield.”

Didn’t know it at the time, but here’s a pic from a significant day in RS history: The Wherehouse in Los Angeles, April 13, 1999

I also learned this morning that this month is the fifth anniversary of the “Affair of the Heart” documentary.

Here’s a great anniversary video about the documentary: