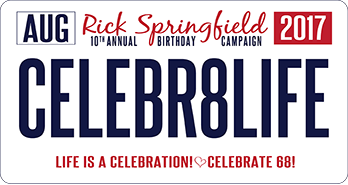 The totals are in for this year’s fan-run Rick Springfield birthday campaign.

This year’s campaign was in memory of his mom, Eileen Springthorpe, who died on Dec. 21, 2016, and raised $17,068.68 to benefit Linda Blair’s Worldheart Foundation, an organization that helps rescue dogs. (Notice the double 68s? That’s relevant since this campaign celebrates RS’s 68th birthday.) The campaign ran Aug. 1-Sept. 15.

Although the campaign is completely run by fans – who design the website, coordinate the donations and donate prizes – RS chose the foundation as the beneficiary. As his fans know, he is an avid dog lover, as was his mom. Helping so many dogs is such a nice tribute to her and I’m sure she would have been so proud to know all the good work being done in her son’s name.

According to the campaign website, happybirthdayrick.com, the birthday campaign started in 2007 and with the addition of this year’s funds, the total raised through all the campaigns is $107,290.83. This year’s total is the second largest amount raised. In 2015, the campaign raised $18,666.  Last year’s campaign was $8,767.

Past charities have included American Gold Star Mothers, a  veterans service organization for mothers who have lost sons or daughters who died while serving in the military; Hoops for Life, a research program for pediatric brain tumors; and charities helping with Haiti earthquake relief efforts. In past campaigns, some funds have also gone to helping individuals with terminal illnesses, such as Ruben, who worked as RS’s guitar tech.

2 thoughts on “Over 100K raised through Rick Springfield birthday campaigns”