Yesterday there were shots of a desert photo shoot  and today the first glimpse of “The Snake King” cover! (No snakes…) And the announcement that the release date of Rick Springfield’s new blues album is Jan. 26, 2018, about  two months earlier than originally anticipated! 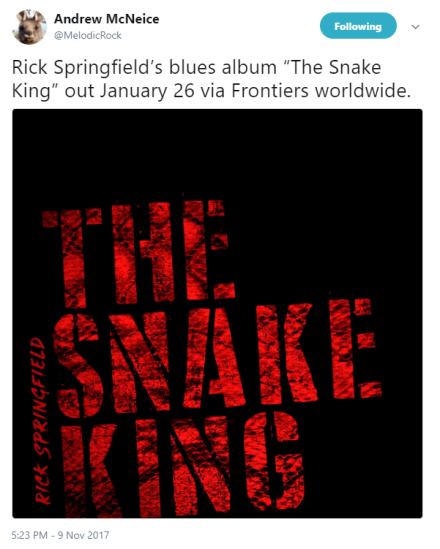 Andrew McNeice is the owner of melodicrock.com and a journalist/promoter in Australia and he shared some of the earliest information on “Rocket Science” back in 2016 (wow, was that only last year – how lucky are RS fans that we get two albums in two years?!) so you may want to keep an eye on his Twitter page.

And MAYBE RS and the boys have been practicing a song or two from “The Snake King” and plan to play one at an upcoming show? Or, if like “Light This Party Up” and “Down” from “Rocket Science,” we’ll get to hear a song or two a little earlier?