For several weeks, guitar pics with the text “I Know What You Want” have been thrown into the audience during concerts and those words were also spotted on RS’s sling after his surgery and on a leather jacket. The other side of the pic said “The Snake King” so it was assumed that would be a song on the new album. But there wasn’t any “I Know What You Want” on the list of songs.

But now, thanks to a new mug on the Rick Springfield merchandise site, now we know that it’s a line from “The Devil That You Know.” 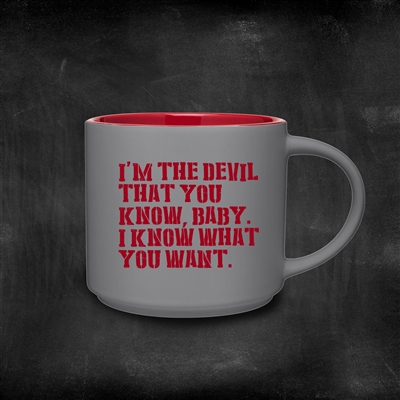 That’s a little fix of “The Snake King” information while we’re waiting for another song to be released. (Because there’s going to be another one released soon, right? Jan. 26 feels like a long way off.  Hanukkah starts tonight, how about sometime in the next eight days?)

Meanwhile, while we are waiting for another song, here’s a little something to enjoy, “Rickie’s Toys” by Leigh Roberts, a new “Jessie’s Girl” parody about Rick Springfield’s “Star Wars” toy collection: