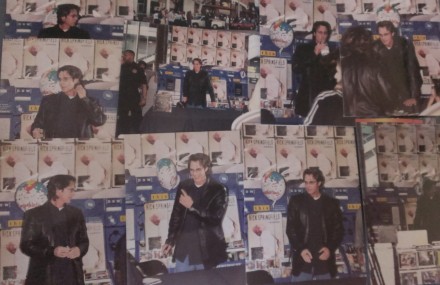 This past weekend I was looking through an old photo album I found in the garage and was thrilled to find some evidence from a concert I attended back in 1998.

I remember being really excited to see Rick Springfield in concert for the first time since the 1980s because I had been such a big fan in high school. So when I scoured other photo albums/boxes earlier on in writing this blog, I was disappointed that I hadn’t documented the experience at all. But it turns out I had!

Unfortunately our seats weren’t very close and my camera wasn’t very good so the actual concert photos I had were variations on this (but at least you can still tell it’s him).

It was long before selfies and although I had one photo of me and my friend from the evening, there weren’t any photos of us at the concert (although I did have a photo holding a giant snowball as apparently it snowed in Vegas that weekend.)

As I continued looking through the photo album I got even more excited. But first I’ll share some background so you can better understand the depth of this excitement

When I first started writing this blog in 2014, I found my journal from 1998 and found my entry about the concert and wrote about it in the post “Rick’s Return“:  “Went to see Rick Springfield Sat. night. Row H. Ah! Rick was great – very nostalgic and I remembered most of the words!”

That 2014 post also mentioned when I met him the following year when he made an appearance at the Beverly Center in Los Angeles the day his “Karma” CD came out (which coincidentally is 22 years ago tomorrow: April 13, 1999).

In February 2015, I found my journal from 1999 and had more details about the Beverly Center appearance (“Meeting Rick Springfield“). I also found an envelope with photos in it from that day – several of him in front of the “Karma” backdrop and one of me holding up the signed “Karma” CD and a signed copy of ‘Success Hasn’t Spoiled Me Yet.” I had hoped that there would be a photo of me with him, but unfortunately there wasn’t any in that envelope.

It wasn’t until 2017 that I even realized that the appearance at the Beverly Center was actually the day that “Karma” was released. (“Karma release: 18 years ago and I was there!“)

And now to explain the excitement about what I found in the photo album – there on those pages were the photos I found years ago in the photo envelopes of him with the Karma publicity photos in the background and even a duplicate of me holding the signed CD and record album. But there were also others!

Here’s what I found:

Pretty exciting right? (Or at least you can perhaps understand why I was excited?)

Anyway, now I know exactly where I was 22 years ago tomorrow.

I wonder if it was a coincidence that “Karma” was the theme of last week’s “Working Class DJ” show (his Sirius XM show on the 80s on 8 channel). I kept waiting for him to play “Karma’ but he played “Souls” instead (which is one of my favorite RS songs so I’m not complaining) then it occurred to me that “Karma” wasn’t actually an 80s song so it wouldn’t work on that channel.

Oh well, I think maybe I’ll go ahead and listen to the “Karma” album tomorrow to mark the occasion.