It shouldn’t come as a big surprise – after all, this year is the 40th anniversary of “Working Class Dog.” So the fact that our teenage heartthrob is performing for what was once known as the American Association of Retired Persons (before the name was shortened to an acronym) shouldn’t be too shocking.

And yet, it is a little.

However, I’m not going to let it get me down. I’m glad I was a teen in the 1980s and didn’t have to deal with social media or the pending arrival of a Metaverse. I’m grateful I made it to the age I am now. Many people didn’t. I’m going to focus on the fact that 40 years after becoming a RS fan, I still get to see him live in concert (even if it’s on a computer screen instead of in person). Hmmm, come to think of it, maybe the Metaverse wouldn’t be too horrible if it meant an RS concert with a virtual “Human Touch.” That would be a silver lining.

So what if songs from my high school years are now on the oldies radio station and the original MTV VJs are featured in an AARP video discussing 80s songs.

Anyway, if you are ready to embrace the AARP connection and accept that you are now part of that demographic (if indeed you are), check out more info about the free virtual concert here or at aarpconcerts.org/rick-springfield.) Membership isn’t required (but you can get some deals on stuff and services as an AARP member – a Black Friday special is a two-year membership for $20, and no this isn’t a sponsored post, just pointing out another silver lining.) There’s a short video (featuring a sleeping Bindi) about the concert on RS’s Facebook page.

The virtual concert performed from his home – is part of AARP’s brain health program called StayingSharp (click here to see a video of RS talking about this in his home studio) and a way to promote the Staying Sharp’s Guide to Music and Brain Health. I was actually interested to learn about this because I feel like I’ve been forgetting things more often lately. But don’t worry, although I may forget what I needed at the grocery store, I still remember song lyrics so I will be able to sing along on Dec. 5.

This year my favorite rock star reaches a milestone age: the big 7-0. You’d never guess it by looking at his lifestyle – last year he performed more than 85 shows, guest-starred in a couple of shows and hosted an ’80s cruise. Although he’s said in recent interviews that he hopes to cut back the touring a bit and get an acting gig closer to home so he doesn’t have to travel as much, he doesn’t seem to be slowing down at all as he continues to write, act and perform.

As I’m reaching a milestone age this year, too, I decided that I’m going to embrace it. My mom was diagnosed with pancreatic cancer at 51 and died a few weeks later at 52 so in the past I always looked at the big 5-0 with a sense of trepidation. But now I just feel a sense of urgency to try things I’ve always wanted to try and if I’m fortunate enough to make it to the big 7-0, I hope I’m still going strong, too.

Yesterday I decided to check out the AARP website to see what that was about (don’t laugh, they have good articles).

Plus, if I’ll be eligible for some discounts soon, I want to learn more.

Another RS connection – Martha Quinn (flashback to that MTV interview with the striped shirt): Look how cute they both look!

Also on the 60 list: Marie Osmond. Yet another RS connection!

Linda Blair is also turning 60 this year – she and RS have a long history together that continues today – her foundation for rescue dogs is usually one of the charities that RS recommends when fans want to donate money in honor of his birthday.

Billy Joel (“Sing me a song, you’re the piano man,” one of my favorite sing-along songs)

And then there he was: 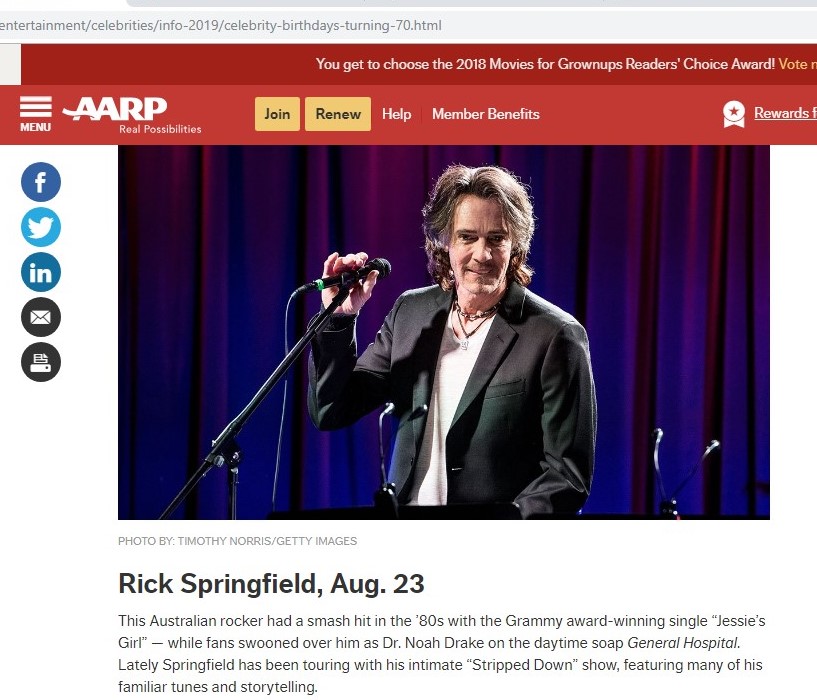 I KNEW he’d be on the list, but it still made my heart skip a beat when I saw it. Imagine that, me almost 50 and him almost 70 and all these years later and I still have that reaction. That’s something that would have shocked me back in 1982.

(Note, Bruce Springsteen is on the list too, which is kind of a connection, as people often get the two mixed up, which RS wrote about in his song “Bruce.”)

As I’ve mentioned before, probably a few times, RS has been a huge source of inspiration to me these past few years. Primarily with my songwriting. (Two notes here: First, I’ve started a songwriting blog so I have another place to ramble about my songwriting rather than cluttering up this blog with it and second, I’m going to be performing a few of my songs at a local songwriting event this month – on the same day RS is performing at Graceland. Absolutely no connection there, but it’s still cool to me.)

Here’s 49-year-old RS on the day Karma was released. When I first met him, he was the age I am now. I just need a moment for that to sink in.

(OK, after I wrote that and posted this pic I noticed that it says “now” in the background. Weird. I have had this picture framed in my home for almost 20 years and never noticed that before.)

Anyway, sure he had a HUGE successful career already by then, but let’s look at all his songwriting AFTER he turned 50:

So the moral of the story is, even though reaching a milestone age might feel unsettling because of all it represents, you should still embrace it because not everybody gets that opportunity to be that age and as long as you’re here, there is still plenty you can do.

I’ve been writing this blog for about a year now and while I enjoy writing it and hope that other RS fans enjoy it, I don’t really share it very much with people in my everyday life because, well, maybe because I realize it can sound a little obsessive at times and with all my other obligations, I’m not too sure they would understand why I devote so much time to it.

So a few people I know are aware of my RS crush but besides maybe talking about it too much with those truly near and dear to me, it doesn’t come up very often. But lately something’s changed.

One of my co-workers brought me her AARP magazine because she saw Rick Springfield in it. My sister admitted that when she recently flew into town for a visit, she found herself looking around for RS at the airport because she thought maybe if she saw him, she would invite him to dinner to surprise me.

Then she went on a date to a restaurant that had a wall covered with cassette tapes and texted me the following picture:

Two funny notes about this picture, taken in a Phoenix restaurant: 1. In high school, a girl in my guitar class traded me any Rick Springfield posters in her magazines for the Alex Van Halen pictures in mine and 2. Quarterflash was the opening act for my first RS concert (see the two cassette tapes right under the RS tape). Kinda funny.

A few weeks ago I convinced someone who loves music and dogs and suffers from depression to read “Late, Late at Night.” He not only loved it, but it transformed him into a big RS fan who has since spent hours listening to his music/watching live performance videos and is now waiting for him to come to town so he can see him in concert.

And lastly, my dad and his girlfriend went to see “Ricki and the Flash” last weekend and they both enjoyed it.

I guess appreciation for RS’s work is contagious when people are exposed to his talent.