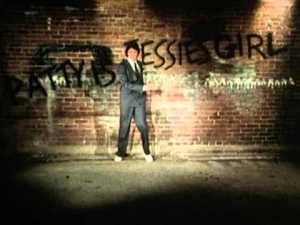 OK, fine. Jessie’s Girl it is. Although there are hours and hours of other songs by Rick Springfield over the past 40 years, if that’s the one that will make people take notice of him again, fine, play it again.

If Jessie’s Girl is the song that keeps getting mentioned over and over again in tweets and what draws people to his concerts, fine, play it again.

For those of you who missed it, he was on for a few seconds in a pre-taped segment on tonight’s CMT Music Awards Show, busking on a Nashville sidewalk. Arnold Schwarzenegger is driving by as a Uber-spoof chauffer (Tom Arnold is one of his passengers) and a woman in the backseat (one of the show’s hosts) points out RS on the sidewalk. Arnold abruptly stops the car as RS finishes singing Jessie’s Girl and Arnold asks him to play it again. “Come on dude, I already played it like 10 times,” RS replies. Then Arnold gives him that “don’t mess with me” look and responds in a Terminator-ish voice, “Play it again.”

So if a few lines of Jessie’s Girl on a national country music awards show that attracts a large audience (about 3 million viewers tuned into last year’s show) is what’s necessary for RS to get the exposure he deserves, then fine, play it again.

To see the video, see this article here.