It’s here – the video for “The Voodoo House”!

If I had to pick my favorite song of “The Snake King,” “The Voodoo House” would be it so I’m happy to hear he’s been playing it live and that he made a video for the song.

From an article on Nola.com:

Playing a shiny National guitar, Springfield seems to glide through a sunny, Spanish moss-draped swampscape, when he’s not cavorting with a mysterious seductress in a smoky nightclub … or is it all just an absinthe-fueled fantasy? Either way, we in Louisiana welcome the Australian-born star to our milieu.

The “swampscape” is breathtakingly beautiful and he’s got that cool rock star look, as do the band members. So fun to watch.

Did you notice that he looked right at me when he sang “I’ve got a voodoo doll that looks just like you?” (He’s still got that heartthrob rock star vibe, and I still have some of that teen fantasy imagination, sorry, can’t help it.)

I almost didn’t recognize Siggy (the bassist) in that cleric getup. I wonder what the story behind that is.

In other news, specifically on chicagotribune.com, there’s also an update on more upcoming RS work:

He’s also the author of two books; the aforementioned autobiography and a fiction novel called “Magnificent Vibration.” He’s editing a new one hopefully to be released this year, he wrote.

As promised, I found some videos from the cruise on YouTube and am posting them here for your weekend viewing pleasure. Thank you to those who posted!

Rick Springfield’s “Snake King” tour is now under way – last weekend, the drum skin with the cute chimpanzee from “Rocket Science” came off Jorge’s drum set and was replaced by the cool logo from the cover of “The Snake King.”

And now some songs from “The Snake King” are part of the set list. Here are two videos I found on YouTube from last weekend:

“The Devil That You Know”

Recent interviews about ‘The Snake King’

There have also been several interviews lately that divulge more about “The Snake King.”

This one reminded me that I was at the show where he first introduced Taylor Swift’s “Shake it Off” to the set list. (I’m pretty sure it was the first time because I remember being surprised about it and it seemed others were, too.) The article also mentions again that he wrote “The Snake King” in four or five days and he’s currently working on the sequel to “Magnificent Vibration.” He answers several questions from fans.

Rick Springfield: From “Jessie’s Girl” to “God, the devil and sex– The pop idol on why hitting it big at 30 was better, learning humility and, of course, “Gary’s Girl.”

This is a great article that focuses on RS’s many accomplishments. (And what a lucky guy this author is – this interview was over “soba noodles and green tea” – aka “in person” rather than over the phone or via email. On second thought, I don’t think I could sit there in front of Rick Springfield and eat noodles, it would be a little awkward. The green tea would probably be OK, though.)

Anyway, there are a lot of interesting details in this article.

Rick Springfield Talks Influences Behind ‘The Snake King‘: Here’s another great RS interview by Melodic Rock. Here we learn more about the influences behind the new CD, as well as learn that he was drunk when he wrote much of it and that the overall theme is “WTF is going on???” (Note: If you are wondering what that means, take a look at today’s news. And by “today” I mean that there’s probably something in the news on any day that will make you say “WTF is going on???”). We also learn about what he would ideally like to do next: “I want to be in a great and creative night time TV series so that touring can be a seasonal thing.”

He is also on the cover of the Melodic Rock Fanzine. 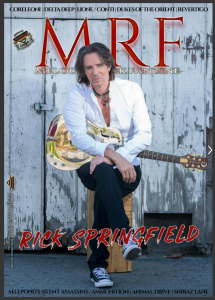 Rick Springfield takes blues detour on new album: We’ve come a long way from those preview articles from four years ago that would say things like “80s icon ‘Jessie’s Girl’ soap star singer to play in town next week.” Thank goodness. This article touches upon many of RS’s accomplishments and contains some real substance like about RS’s writing process and details about the new songs.

This review of “The Snake King” is on an online magazine for hard rock and heavy metal. Do you hear that, Rock and Roll Hall of Fame judges? RS has fans from so many generations and in so many genres. Let’s plan for 2019, OK?

‘The Snake King’ slithers through your speakers like a honky-tonk cocktail consisting of good time boogie-woogie, with a heavy splash of heavenly blues ….. keep rocking n rolling buddy, we are right with ya!

Where to find everything before ‘The Snake King’

I just wanted to take a quick moment to thank the Rick Springfield and Us fan-based website for all things Rick Springfield for adding a link to this blog on the site. It is truly an honor to have a mention there on the comprehensive site of all things Rick Springfield. (Seriously, there is so much about RS on that site, it is so awesome. His music library, lyrics, tour dates, TV and film roles, bio of his life, books, video footage,  lots and lots of pictures and so much more.) I wonder if RS used the site as a reference when he wrote his autobiography?

I suppose I should also mention the official RS page, too: rickspringfield.com, which has a list of all the upcoming full-band shows, Stripped Down acoustic shows and symphony shows (coming up in Portland and Nashville), as well as next month’s ’80s cruise.

And then there’s the latest news of the evening: Another new video – for “Voodoo House,” which is one of my favorite songs off “The Snake King.” It makes my heart go boom. (See the RS fan site for lyrics if you don’t have a copy of the CD.)

Filmed the video for “The Voodoo House” off the new record The Snake King in New Orleans today… Stay tuned! pic.twitter.com/N4h30rAFXA

Happy Monday to you! 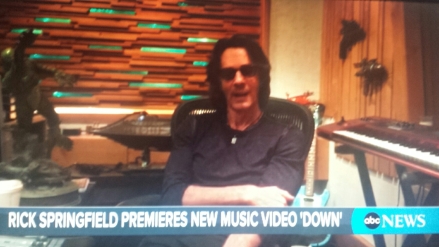 And click here for the interview in his home studio that happened right before it.

Now that I know RS and the band are traveling by bus for this tour, I won’t have to keep an eye out on at the airport when I’m flying next month. Not that I was going to be in the same city at the same time as the tour dates, but that hasn’t stopped me before.

In the interview, RS says he’ll play for free and will only ask that travel expenses be paid. OK, fellow Arizona RS fans – let’s pool our funds for a private show! Let’s discuss at the Phoenix show next month… 😉

Cool video – great use of drones! And the concept goes so well with the idea of “Down,” looking down at the band and the water and the cliffs. Clever and oh so purty.

My youngest son was home from school today and he entertained himself at my office and on the way home with my phone, taking lots of pictures and making videos. This is what I discovered when I got home.

OK, maybe the the headline of this post is misleading, but it is accurate. Anyway, I thought it was cute and hopefully we’ll see the official video soon.

I had intended to stop writing this blog and convinced myself that it was the right time, especially after my recent discovery  (see previous post). But then there was this yesterday:

On location for the new video shoot in sunny #SanDiego #drummer for #rickspringfield pic.twitter.com/NS4zcJJxBf

I was so excited that there will be a new video soon and realized that I don’t know anybody in my real life that really understands how excited I am about this (or who wants to hear about it) so I had to come back here to write about it.

A new video – whoo-hoo! MTV was such a big part of my teenage years. Although we never had cable, I did A LOT of babysitting for families who did have cable and as soon as the kids were asleep, I switched on MTV. So now instead of waiting for a babysitting gig then waiting for the kids to go to sleep so I could wait for a Rick Springfield video, now I’ll just watch the Internet for a sign of the new video. Sort of like the ’80s, except now I’m 30 years older. That’s OK though, right?

Anyway, when I first saw the photo of RS on the mountain, I thought it must be for “Down” because the song mentions a mountain and a river. Except the video was being filmed at an ocean, so maybe not? Then I thought maybe it could be for “The Best Damn Thing” because of the “crying on the beach” line. But that was by a raging sea. What’s the difference between an ocean and a sea anyway? “Crowded Solitude” mentions an ocean, but it seems like “Down” would be the next single since “Rocket Science” was always promoted with “Light This Party Up” and “Down” and there’s already a video for “Light This Party Up.” Yes, all of this actually crossed my mind and I couldn’t even discuss it with anyone!

And then the answer came today:

Shot from the video shoot for "Down" off the new record #RocketSCience yesterday. https://t.co/4DLQo7pMQ5 pic.twitter.com/YfKoR6XRJz

Did I mention how excited I am about this?

I just came across this – it’s my new favorite RS video ever (on a separate level than the musical ones).

I’ve been going through my notebooks from the last 30 years finding all my old songs, so this video really resonated with me. Just like RS, I now type all of my songs (sometimes I scribble in the notebook in my purse, but usually only the full song makes it onto the computer) but all my old ones are in notebooks, with plenty of cross-outs, scribbles and re-writes. (I recently went through many of them and selected some to send into cyberspace on Beyond the Notebook.)

This video is so fun to watch, thanks for sharing, RS!

A few months ago, I wrote a song to summarize “My Rick Springfield Crush Revival” and this past weekend, I decided to try to make a video out of it. So I recorded it (on a tape recorder at home) and experimented with the Movie Maker program that came with my computer.

Disclaimer: I have no illusions about being a great singer or guitarist but I did have fun making it! The video – and this blog – is dedicated to my teenage self who would have enjoyed doing these types of things if the technology had existed at the time.

I hope you enjoy it!

The lyrics are here.