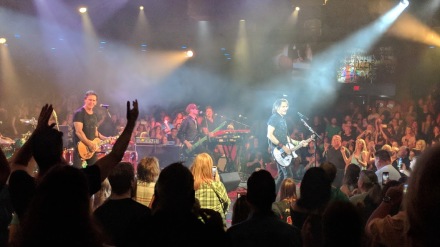 Something about last night’s Rick Springfield concert at the Celebrity Theatre was really special. Although I’ve seen RS live more than a dozen times (yesterday was #13), last night’s show had an incredible energy.

Maybe it was just me, after all it has been more than two years since I’ve seen a show in person, or maybe it was the venue, where the stage rotates in the middle of the audience, making it feel like a big party.

I feel like we saw a different side of RS and the band (literally, as there are times when the front of the stage set is facing the opposite direction and you get the rear view. One woman behind me commented on how shiny Jorge’s hair is. “I’d like to know what kind of hair products he uses,” she said. That likely never would have come up during a show on a typical stage.)

RS’s band performed with Tommy Tutone, the opening act, and Greg Kihn, who seemed so excited to be there. It was cool to hear his songs live, songs that I remember from MTV days in the 1980s, but I also liked his song, “The Life I Got,” which is from his new album, “Rekihndled,” his first album in 21 years.) Loverboy was the third set of this “Best in Show” lineup.

A “backstage” view during the rotating stage show (during the Tommy Tutone set).

The RS band did a great job backing up Tommy Tutone and Greg Kihn. I’ve always appreciated how talented they all are, but this time I noticed them even more because during the times RS was facing the other side of the room, it was fun watching the other band members – guitarist George and drummer Jorge tossing drumsticks to each other and bassist Siggy jumping around the stage in his “Devil” hat (in the school colors of Arizona State University, whose mascot is the Sun Devil). I saw keyboardist (and guitarist) Tim give a high-five in the audience, too.

RS and Siggy really played the whole round stage thing so well, running around and climbing on amps. It looked like they were having so much fun.

This show was also the first time I heard any of “The Snake King” songs live – he played “Little Demon” and “Voodoo House.” I got a great video of the “Hey-ya Hey-ya yo”s, complete with the kicking of the stool (I’d be careful with that move, RS, it got a little too close to the edge of the stage and the woman in the front row did NOT look happy – she was directly in front of me, across the stage, and I saw the look on her face.) But I cut that part from my posted video because it also had some fan climbing on the stage appearing to collect rose petals and she ended up getting escorted out so I don’t want to embarrass her.

In the Voodoo House. Hey-ya, hey-ya yo!

That portion of the song also contains my perceived eye contact moment – when he reaches his arm out to the audience and sings “Hey-ya, Hey ya yo!” I think I instinctively waved back, but felt silly afterward.

During the medley portion of the show, he sang part of “Bruce,” which was the first time I’d heard it live so that was a treat. He also threw in “867-5309” because “everyone thinks it’s my song.” That was especially funny, of course, because we had sung the song along with the original songwriter earlier in the evening.

We also got to sing “Happy Birthday” to him and since this show is the last one before his actual Aug. 23 birthday, that felt special, too.

The BIG omission of the show was that there was no “Human Touch” – no mention of the song at all and no journey out into the audience. I’m not sure if it was the venue or the timing (at one point he mentioned that he’d be heading straight to the airport after the show and had to get up at 4 a.m. to film an episode of “The Goldbergs” the next morning), but it was weird to not have that song part of the show.

Here’s a compilation of some of my videos from the show:

Alas, there was also no personal RS encounter for me this time around. I saw a group with Backstage Pass lanyards gathered by the downstairs bar and looked for an opening, but came up with nothing. I resorted to asking someone at the radio station display if they were giving out any meet & greets that evening and she kindly responded, “No, I think we’re all out,” but the look in her eyes was, “You’re kidding, right?”

I had parked in the back part of the parking lot and saw the band (with Jorge and his long, shiny ponytail) walking toward a white van as I walked to my white (mini)van, but my favorite rock star was nowhere in sight. I waited a few minutes longer just in case (there were a few people hanging around), but it soon cleared out so I headed home.

Side view of the rotating stage 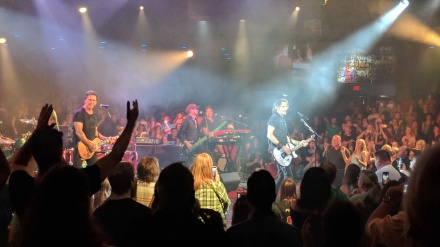 The opposite side view of the rotating stage 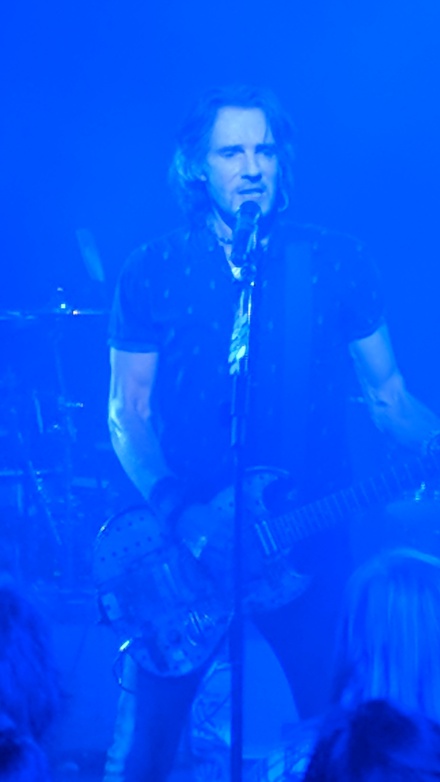 Facing the front of the stage, with a zoom from the ninth row.