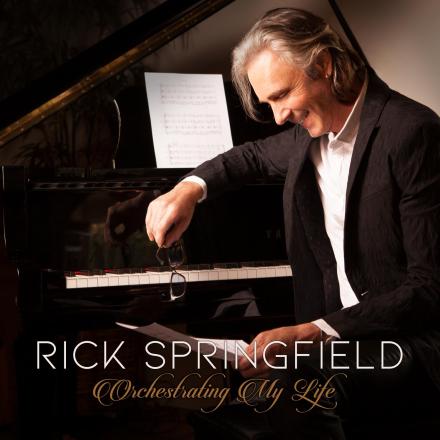 Although I thought it was so cool that “Orchestrating My Life” took Rick Springfield hits and recorded them with his band and a symphony, part of me wasn’t as driven to listen to it as I had been his previous new albums in the last few years (“Rocket Science” and “The Snake King”) primarily because I’ve heard his hits countless times.

So now it’s already TWO days after its release and I’m just now listening to it. True, I’ve already watched several videos filmed at his symphony shows the past year or so, including the beautiful new song “Irreplaceable” about his mom, but I hadn’t yet had a copy of the new CD until tonight.

So, in case anyone is interested, here’s the first impression.

Kristina: As I sit in anticipation of listening to the album, the first song has a different beginning than the original. Maybe it’s the album preview in the back of my mind – the one with the red curtains that was posted on social media not too long ago- but I feel like I’m sitting in a theater listening to the overture of a play, with the anticipation of waiting for the show to start. OK, now it’s starting to sound familiar. And here’s RS starting to sing. Whoo-hoo! He sounds so good, it’s amazing to think it’s 37 years after the original recording. Thirty-seven!!!!! Plus it’s super cool that his current band is playing on this one. They are such an important part of the whole RS live experience and they’ve played these songs so many times, it’s nice to have them forever immortalized on a version of these songs.

Here’s a video of the song that was recently released:

I’ve Done Everything For You: This one starts out right away the way you’d expect it to, but with a little extra from the orchestra. The mix of the orchestra and the electric guitars sounds so cool!

Don’t Talk to Strangers: Again, it sounds like you’d expect it to, but with extra depth from the symphony.

Jessie’s Girl: Although I’ve heard this song SO many times and it’s the only RS song I ever hear on the radio these days, I’m still singing along – this version rocks and he still sounds so good singing it.

Affair of the Heart: Such a cool opening. Familiar and yet different. Makes me start thinking of how long many of his fans have been fans. When this originally came out, RS was 33 years old and now it’s been 36 years since it was released. I was 13 then and now am hearing a new version of the same song sung by the same guy who is now almost 70 and he sounds just as good. My mind is blown. This time around, I can clearly hear the words he’s whispering…

Love Somebody: Rocks as usual.

Human Touch: This symphony adds some fun stuff here, not sure what instruments they are, but it sounds good. The only downside to listening to this with audio only is that RS doesn’t come out of my computer for some human touch (like he comes out in the audience during a concert). In fact, he skipped this song altogether at the last live show I was at. Maybe the next CD will include some virtual reality component to take care of this.

Celebrate Youth: My mind just flashed back to a 2015 Stripped Down Q&A where RS explained his inspiration for this song. (See the “Inspiration for Songs” post for a reference.) But then I returned back to the present to ponder on how great RS sounds today.

World Start Turning: As I mentioned in a previous post, this song isn’t imprinted on my brain like the others, but it fits so well on the CD and is such a beautiful song. I think it’s one of my favorites on this CD so far.

Souls: OK, this song isn’t actually on the CD, but I’m including it here because it’s one of my favorite RS songs and it sounds so beautiful with a symphony so I think it should have been included. Here’s a video posted on YouTube by rsandus from a symphony show about a year ago. See if you agree.

State of the Heart: OK, how does his voice sound the same more than 30 years later? I must say, I’m realizing my teen self had really, really good taste when it came to selecting a favorite rock star.

Irreplaceable: This one I listened to with my eyes closed to really focus on it, although in my mind I saw RS performing it live with such emotion. Such a beautiful, touching and meaningful song.

April 24, 1981/My Father’s Chair: “Orchestrating My Life” is dedicated to RS’s parents, Norman and Eileen Springthorpe, so it’s fitting that the CD concludes with the songs dedicated to them. The addition of the symphony to these two songs makes them even more powerful and provide a somber ending to the CD. I think this CD would have made both of his parents proud.

Bravo, bravo to the whole RS team behind the CD!

Now if only The Phoenix Symphony would bring this performance to Symphony Hall!