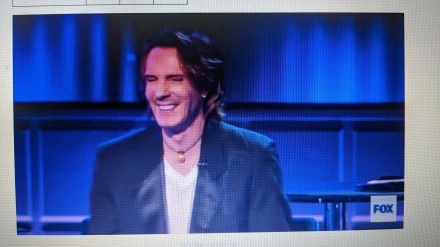 Although Thanksgiving may feel very different in so many ways this year, that evening we get to pretend for a little while that things are normal – that there’s a new TV show episode we can watch that features a favorite rock star.

So let’s all say a moment of thanks that Rick Springfield will be the musical guest on this week’s “I Can See Your Voice” reality show. (It’s usually on Wednesdays, but this week’s is on Thursday, probably because with all the other crazy things going on in the world right now the universe wants to sprinkle an extra dose of something for us to be thankful for. Yep, that’s probably it.)

The game show is an adaptation of a South Korean show and the premise is that a contestant must figure out which of six “secret singers’ can actually sing. The singer left at the end then performs a duet with the musical superstar. Should be interesting! I haven’t watched the show yet, but I plan to this week!

The show premiered in September, with only one episode completed before production was halted due to the COVID-19 pandemic, according to an article on deadline.com. Then Fox resumed production with no audience under enhanced safety protocols in August.

The show is on this Thursday, Nov. 26, at 9/8c on Fox. Have a safe, healthy and happy Thanksgiving!