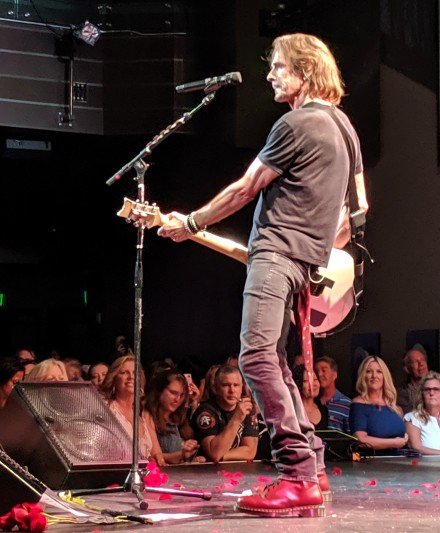 Earlier this month, Rick Springfield had back-to-back-to back-to back California shows, which I’m sure was a thrill for people in that area who were able to attend all four (or any combination of them).

First there was the July 11 show with the Pacific Symphony Orchestra, which got a lot of rave reviews from multiple publications. In The Greene Room Magazine, the writer shares many fun moments from the show and shares her enjoyment of the show.

Rick Springfield is the ultimate showman, having charisma, sex appeal, over the top talented musician, and very fan friendly, he plays with the fans, teases the fans, takes selfies with the fans, all this while onstage. …

In closing, Rick Springfield turns seventy next month; it’s a thought that never crossed my mind. His energy, dancing, jumping and kicking, his zest to entertain, he gives us life.

Over the next few hours, Rick Springfield delighted his legions of fans with a spectacular set composed of 14 songs that spanned an amazing musical career of over 40 years. Sure, fans came for classics like “Don’t Talk to Strangers” and “Affair of the Heart” but lesser known hits like “Souls,” “Irreplaceable,” and “Kristina” were simply incredible and showcased Rick’s amazing talent as a vocalist.

Both articles also have some great photos from the show.

A couple of the articles mention a RS comment about him playing with an orchestra:

“My mom would have loved this except she wouldn’t have been happy with me swearing: ‘Richard, you’ve got to be a good example for the kids!’
“The kids are all in their 50s, mom! They’ve already decided if they want to swear or not.”

A Q&A in the Baltimore Media Blog, where he mentions that one of the reasons he rerecorded the vocals for “Orchestrating My Life” was because he doesn’t own the masters (which I found interesting in light of the recent coverage of Taylor Swift’s masters). There was also this:

What do your fans mean to you?
They are the reason I do what I do.

In the Las Vegas Review-Journal : ‘80s icon Rick Springfield still rockin’ after all these years,” we get to hear a little more about the third novel he’s working on (the first being “Magnificent Vibrations” and the sequel reportedly being called “World on Fire.”)

According to the article, the new novel is about music and depression. “The main character is a musician who suffers from depression and is a sex addict. It’s kind of interesting. People say to write what you know, so I’m writing what I know. This is my third novel and this time it’s truer to life.”

Whoa, can’t wait to read that!

Here are videos I found on YouTube from the July 11 show (posted by Johnny Maldjian). I may have mentioned this in a previous post, but I sure dig that burgundy suit and haircut:

The next evening, at Thunder Valley Casino Resort in Lincoln, California, RS performed a show with Richard Marx, playing their own songs separately and some together. Here’s a video (courtesy of Rick and the NEWSflash RATNF Radio) of them playing Richard Marx’s song “Don’t Mean Nothing.”

The following evening, he performed at Wente Vineyards in Livermore, another full-band show, this time with Tommy Tutone and Greg Kihn.

Then on July 14, a Stripped Down show at Rodney Strong Vineyards in Healdsburg, CA with Richard Marx. (When I saw a video posted on one of the RS fan Facebook pages, I noticed there was a small RS sign on the wall behind the stage, which I thought was cool before I realized that it related to the name of the vineyard and not the rock star.)

When I was looking for videos from these shows, I came across this one posted by donna2kayak, from the show I attended last month and since it’s taken from the the other side of the stage, I see my blurry self standing there filming the same song, “Souls.” Me in the same room with RS only a few feet away. So incredible. Ooh, it looks like he’s looking in my direction. Did he see me?

Oh sorry, was I writing a post here? I got a little distracted.

Here are both videos if you want to attempt getting them to the same timing so you can see it from both angles at the same time.