My morning commute was physically the same as it usually is, but this morning, my mind took me on a completely different journey based on what played on the radio.

It started with “Don’t You Want Me” by the Human League, which was my favorite song in eighth grade and reminded me of the crush I had on a classmate’s older brother.

The reception on that station was a little fuzzy so I changed the channel and the next station was playing “Hungry Like the Wolf” by Duran Duran, which made me think of that time in high school when me and three of my close friends sat around in a circle singing “Hungry Like the Wolf” as part of a rehearsal of a band that we wanted to form but never did. We were HUGE Duran Duran fans in those days.

Then it was “Danger Zone” by Kenny Loggins – a song my kids like. My husband recently watched “Top Gun” with them so that scene recently played on the TV in our living room.

Next was “Jessie’s Girl” and you can probably tell that the musician who sings that is often on my mind.

Following that was “Rocket Man” by Elton John, which reminded me of all of RS’s connections to Elton John through the years, as mentioned in “Late, Late at Night.”

And right before I got to the office was “When Doves Cry” by Prince, which is one of my favorite Prince songs and of course it reminded me that he is no longer alive. : (

Then my internal musical journey ended because I got to the office.

Speaking of music, there’s another weekend of Rick and the NEWSflash Radio being planned for Memorial Day Weekend. Here’s the info:

This Memorial Weekend, Rick and the NEWSflash Radio is broadcasting non-stop the tunes of Rick Springfield & Friends starting this Friday 1200AM PST 5/26/17 to 9PM PST Sunday 5/29/17.

SAVE the below link to enjoy online.
LISTEN: at http://bit.ly/2nlWcJ3

​Really sorry about the cancelled gigs this week but a bad sinus infection got the best of me. Too many planes, airports and exposure to stuff I suppose. I’m resting up with my charming dog right now but hope to hang out with you soon at the upcoming shows 🙂

Posted with the message was a photo of his cute little dog Bindi curled up on the couch.

Aww, poor guy. He works so hard, the only time he seems to stop working is when his body forces him to rest.

So I hope he listens and gets some rest. According to his website, there are no concerts scheduled for another month (except maybe for some unposted performances for fundraisers like the one last week in Florida). So unlike his previous breaks, where a lull in concerts meant filming a movie or TV show or recording a CD, maybe he’ll just relax with his family and dog for a few weeks.

Sure, there’s also the “Magnificent Vibration” or autobiography sequels to work on, too, but those can also wait.

My Mother’s Day gift to myself came in the mail today.

Well, nobody actually says that, I just made it up. But that’s what I am going to do. 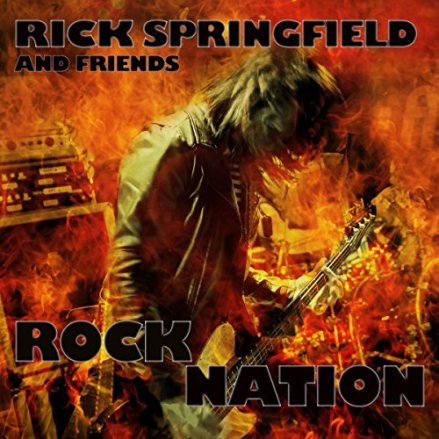 I came across this today: “Rock Nation” from Rick Springfield and Friends – released April 1, 2017.

What?!  The digital download is a compilation of songs, but there’s only one written by RS: “Starlight, Starbright,” which was on “Mission Magic” (1974).

Not sure what the story behind this is or what the connection is between these songs – or if it’s even officially sanctioned by RS. The cover looks a little creepy and doesn’t really seem to fit the musical style of the songs (judging from the samples).

Two days and 17 years ago I was at a Rick Springfield concert but until today I hadn’t found my journal from that year so I had no memory of it; it wasn’t until I noticed the anniversary date on somebody’s Facebook post that I realized I had been at that particular concert.

Today I realized that my notebook from that year wasn’t with my earlier ones because I had recently moved so it was part of my current life (current at the time) rather than my past and was in a different place.

I found the notebook and since past RS shows had resulted in at least a page of details about the show (or long blog posts, after 2014), I couldn’t wait to see what I had written about it.

I quickly turned through the pages to find the date: 5/5. There were only two lines: a mention of the concert, who I went with and where it was. Two lines, no details.

The pages before and after were filled with heartbreak and dating drama, which reminded me of that relationship from so long ago that so consumed me. It also appears that I was recording my dreams that year, as many entries are fragments of dreams, probably written right after I woke up.

There were also lots of entries of  lyrics – some of them with melodies I remembered; the lyrics remind me how I was feeling at that time.

After that 5/5 concert in 2000 (my sixth RS show)  I wouldn’t see RS in concert again until 15 years later. And by the time that concert occurred, I had been writing this blog for eight months, after coming across a TV interview after his novel was released.

Why is it that back in 2000, a RS mention was two lines in a journal and now, in my 40s, I’ve written over 260 posts on a blog about him, a process that provided inspiration to start writing songs again? In this early months of this journey, my goal was to record some of my old songs so they’d exist outside of my head and I’ve only recorded a couple of them so far because I’ve been so busy writing new ones instead. If I would have been so inspired 17 years ago, who knows how many songs I’d have by now or what I would have done with them.

Maybe because sometimes when your head gets clouded with negative things, it’s more difficult to recognize hints of inspiration. Or maybe things are happening the way they are – when they are – for a reason and you can’t look backward, only forward.