First, on May 15 RS performed at Acoustic 4 a Cure, a concert organized by “The Red Rocker” Sammy Hagar that benefitted the pediatric cancer program at UCSF Benioff Children’s Hospital. The sixth annual concert, held at the Fillmore in San Francisco, also included Nancy Wilson of Heart, Bob Weir of the Grateful Dead, Chad Kroeger of Nickelback, Joe Satriani, Tom Johnston of the Doobie Brothers, Michael Anthony, Jason Bonham and Vic Johnson. There are some great pics from that evening on Sammy Hagar’s Facebook page.

Sammy Hagar’s first appearance in the Rick Springfield story was a few decades ago. He wrote the song “I’ve Done Everything for You” in 1978, which he released as a single that didn’t make the charts.

Then a few years later, Keith Olsen, who produced RS’s “Working Class Dog,” suggested that RS cover it. It was released in 1981 as a single after “Jessie’s Girl” and became a hit. From what I can tell, this year, 38 years later, marked the first time they played it together – first during the taping of Hagar’s “Rock & Roll Road Trip,” which aired on AXS-TV on Sunday – and then at this benefit concert. (Update on June 5: I just learned that the filming of Hagar’s show was filmed in June 2018 so it was actually 37 years later.)

The “Rick & Roll Road Trip” (as the episode was called) was so great! It was a fun interview that took place at the Springthorpe home in Malibu and included RS & SH playing IDEFY together for the first time in RS’s Black Lagoon home studio. What didn’t air was any mention of the tequila story mentioned in the Stripped Down shows. (SH once gave RS a bottle of tequila as a thank you for IDEFY and one day RS came home to discover that his sons drank it – in the very same house that SH visited for the interview. He may have even walked on the same floor where the bottle sat all those years ago.)

One thing I learned in the interview was that they didn’t really know each other all that well before the interview so it was cool to watch them enjoy each other’s company since they’ve had this shared IDEFY connection all these years. RS has played SH’s song hundreds if not thousands of times over the past few decades so it was to fun to watch them play it together.

When SH asked RS what he’d like to do next, RS said he’s interested in doing more work for charities that benefit animals and children, which I thought was really beautiful. Perhaps his answer to this question was what led to him performing at SH’s Acoustic 4 A Cure last week? Everything is connected somehow it seems, although sometimes we don’t discover it until later.

(To clarify: Yes, I know that Acoustic 4 a Cure was SH’s benefit (he does lots of charity work and seems like a great guy) and that RS was a guest and RS was also a guest on SH’s show, but because this is a RS blog, SH is the special guest here.)

In other recent RS news:

A wonderful review of “Orchestrating My Life” in the Herald-Standard:

As a whole, “Orchestrating My Life” showcases Springfield’s talent for crafting and delivering songs that make us laugh, cry, dance and sing out loud like nobody’s watching.

And RS is scheduled to perform on The Talk this Wednesday. 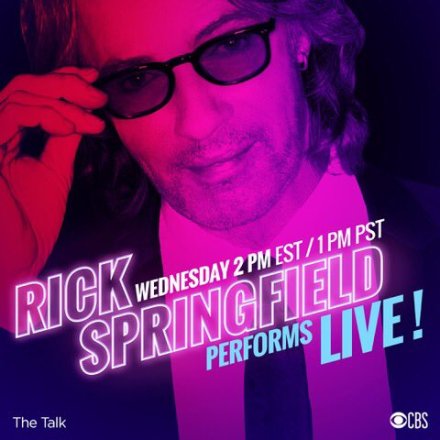