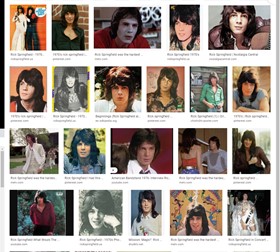 Social media is filled with misinformation and “fake news,” causing Americans to often have very different realities, depending on what information their news feed feeds them. I witnessed some of this firsthand yesterday on Twitter.

It wasn’t a political matter nor a health issue – both which I claim no expertise about and rely purely on news sources that I deem reputable – but I want to use my minuscule spot in Cyberspace to clear up one misconception.

I’m referring to a thread that mentioned actors who released songs in the 1980s and Rick Springfield’s name came up as an example of a soap opera star who released an album.

I find it difficult to believe that despite RS’s illustrious career as a musician, actor and author, in some Twitter feeds he’s reduced to a soap opera star who had one hit song so I wanted to clear that up. (Although readers of this blog already know that, of course, I just wanted to document it in case a conscientious tweeter wants to do a little research before spreading misinformation.)

Here’s some evidence that shows that indeed Rick Springfield pursued music before acting.

1.Long before he was Noah Drake, RS was a guitarist in a successful Australian band, Zoot, before ever coming to America.

2. Although he wasn’t the singer of the band, he was already writing songs at that time.

4 Here is an interview with RS about his music career in 1972, long before Dr. Noah Drake existed and before he started acting (Australian accent alert!).

5. In 1973, he made his debut on American network television (after being named Australia’s number one songwriter) on the “The Sonny and Cher Show.”

7. RS got a little off track from his dreams and took what he thought at the time was a good opportunity and wrote music for a cartoon, “Mission: Magic!” (But of course there are no mistakes – it was just part of his long career and likely gathered some of his longtime fans at this point.)

8. In 1976, Dick Clark interviewed RS on “American Bandstand” (also featured is Jack White, who toured as RS’s drummer through the 1980s and producer Jeff Silverman who has produced many RS songs through the years). In this interview, he talks about how important his music is to him and now he was focusing on getting back on track.

10. I also found this gem online: RS live at ‘The Starwood in Hollywood, CA in approximately 1977. The video’s not the best quality, but it sounds great!

11. In 1978, he was on the MDA Telethon, performing his song “Bruce,” which was about how people often confused him with Bruce Springsteen.

12. Here’s a 1979 video of “Take a Hand,” still before Dr. Noah Drake. (By this time he was supplementing music with acting and had appeared on “The Six Dollar Man,” “The Rockford Files,” “Battlestar Galactica” “Wonder Woman” and other 1970s shows.)

13. Rick Springfield’s first day on “General Hospital” was March 25, 1981, about a month after “Working Class Dog” (his fifth studio album) was released. The synchronicity of his first huge hit album and being on the most successful soap opera propelled his career to new heights, but behind that seemingly “overnight success” was years and years of dedication and hard work.

At a time when people become famous for the strangest reasons – and sometimes overnight due to a viral video – I think we should recognize when people truly work hard at their craft and successfully keep it at for decades.

Not only did he have a whole musical career before “General Hospital,” RS has toured almost nonstop for the past 20-plus years only to be stopped by a global pandemic that shut down all tours. He’s also written a best-selling memoir, a best-selling novel (with the sequel scheduled to come out next month) and released three albums just in the past five years (not to mention all those he released between “Working Class Dog” and 2012’s “Songs for the End of the World.” He’s continued his acting career, too, continuing to guest star on TV shows and even acted in a movie with Meryl Streep.

So to say that RS is an actor turned musician isn’t correct. Did he find musical success after being on a successful soap opera? Perhaps, but it doesn’t group him in the same category as a “soap opera star turned musician.” (Personally, I find his career so inspiring, as it is an example of the importance of perseverance when pursuing one’s goals.)

Is this the most pressing issue in our country right now? Uh, no, not at all. But it does prove that you can’t always believe what you read on social media. (Plus it’s fun to watch these old videos and if they can provide enjoyment and a break from all the awful things currently happening out there, then it’s worth addressing.)