There are so many great photos on social media today from last night’s “All the WOO in the World: An All-Star Celebration of Bernie Worrell,” an all-star concert to help raise funds/express appreciation for the musician, who is battling stage-four lung cancer.

Stepping back for a moment from my initial reaction of “Wow, there are so many great photos of Rick Springfield, he’s looking better than ever,” let’s take a moment to reflect on what a great event this was. In addition to the amazing musicians that performed there, these quotes from a “Rolling Stone” article sum it up well:

“This year has been tough — we’ve lost so many great musicians,” Living Colour guitarist Vernon Reid told Rolling Stone. “Bernie is facing a serious situation, but he’s determined to make art, to play it out. This will be a great opportunity to recognize and celebrate a person while they’re still here with us.”

“Artists don’t get 401Ks; they don’t get insurance with their record deals; they don’t get a lot of stuff that other people get in corporations, like the people inside the music business get,” notes Nona Hendryx, who is spearheading the April 4th benefit. “I wanted to do something where Bernie could hear people sing his praises while he’s here.”

Such great sentiment, since so often people don’t express their appreciation for others until it’s too late to tell them. When artists are memorialized in the press after their death, I have often wondered if they realized when they were still alive that they were so valued.

The RS connection to this event was that Worrell was the keyboard player in “Ricki and the Flash,” which made this also a mini-reunion, as Meryl Streep and director Jonathon Demme were also there. (Another reason why it was a good thing that he listened to his publicist and flew across the country for the “Ricki and the Flash” audition, right?)

Click here to learn more about the fund set up to help Bernie Worrell with medical expenses.

My fascination with Australia started in third grade when I really wanted to go hug a koala bear. Although I’m not much of a collection person, I did seem to accumulate many koala stuffed animals around that time. I still have never been to Australia but my RS crush continued my fascination with the country (and I enjoyed seeing the beautiful country through Wiggles videos, too, when my kids were younger).

Anyway, RS was recently in Australia to promote “Ricki and the Flash,” which opens there on Aug. 27, so I’ve enjoyed watching some of the promotional interviews there (and listening to the accents). One thing in particular that’s interesting is how the questions differ from the American interviews because of the circumstance – these include his fame in Australia in the 1970s, why he hasn’t toured in Australia since he found success in America and that they forgive him for cancelling last year’s tour because he was filming “Ricki and the Flash.” He also told the interviewers that they are planning to tour in Australia next year. Here are some of my favorite interviews from his recent visit.

The Fix: “Rick Springfield on his Aussie roots, his ’80s lowpoint and rocking with Meryl Streep in their new movie” (click on photo for interview).

Looks like they are having a good time with this one:

This one is a fun one, too, as you can tell by the title: “That awkward moment when your interview goes way off.”

And here’s another good interview:

In this interview, RS mentions that he just finished a script: 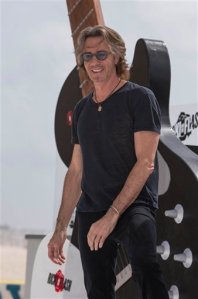 Actor Rick Springfield poses for photographers to promote his upcoming film “Ricki and the Flash” at the Summer of Sony photo call in Cancun, Tuesday, June 16, 2015. (AP Photo/Christian Palma)

I attended an advance screening of “Ricki and the Flash” tonight (not THE premiere in New York, but one in Phoenix). I was already a big fan of Meryl Streep, Kevin Kline and Rick Springfield (obviously the last one) and the mix of all three of them together – along with a storyline of music and family comedy-drama, I knew I would like it even before walking into the theater (or, to be more precise: before checking in my cell phone and getting wanded before walking into the theater; no photographing allowed during the movie – duh – sad that adults just can’t be trusted to not film a movie in a theater).

I don’t want to spoil the movie for anyone, so I won’t go into any details about the actual film but here are a few things that I knew about it beforehand that deepened my appreciation of it:

1. Meryl Streep learned guitar for the movie. I really admire the way she jumps into her roles and learns new skills for her films.

2. RS plays the guitar – a Gibson SG- that he wrote “Jessie’s Girl” on. The script called for one and he had one so he played his own. Serendipity!

3. The musical scenes were shot live and not dubbed over to fix any mistakes so they were actually how they were played during the initial filming. (It all sounded pretty flawless to me anyhow.)

What I wish I would have known before the movie – bring tissues. I realize I may be oversensitive – I used to tear up at Hallmark commercials back in the day when you couldn’t fast-forward past commercials – but it was kind of an emotional movie for me, lots of tears. All the family drama, regret, unfulfilled dreams, failed relationships. Plus tears of joy, too, with the happy moments in the film, as well as being thrilled that RS had such a great role!

During the opening credits, somebody next to me commented when RS’s name came on the screen, “Rick Springfield is in this?!” which I just found hilarious considering how much I’ve been hearing about the movie lately. Between this film and his recent role in “True Detective,” I hope that when his new album comes out in January (or whenever it finally comes out), it will get a great deal of positive recognition, too.

Oh, and this was a fun start to the “Ricki” week, too – a video Q&A with RS on a radio station’s Facebook page, with RS answering in video replies to fans’ questions.

Wonderful story about Rick Springfield on The New York Times website today (scheduled to appear in print this weekend).

So happy to see that Rick Springfield is FINALLY getting some of the recognition he deserves.

For the role, Ms. Streep had to learn how to play rhythm guitar as if she had been playing it for four decades (she had not). “Rick was endlessly kind and patient with me, and it must have been a colossal nightmare for him to hear me make the same mistake on the same chord for like a week,” she said in an email interview from London. “It was almost as if Jonathan cast the band as much for their compassion as for their rock cred.”

Since the film wrapped, Mr. Springfield has been working on a follow-up to his novel. He has a new album coming out in January, his 18th, and this summer, he’s also (no surprise) going back out on tour.

“Could I ever do it?” Ms. Streep said. “No way. We shot a full week of work, and I would go home and sit in the bath and put Biofreeze on my knees when I got out and sit around all Sunday. Rick Springfield, on the other hand, boarded a plane on Friday, flew to Minnesota or Tulsa or Missouri, and played two nights of shows for thousands of people.”

Plus coverage by Entertainment Weekly, People, nighttime talk shows, daytime talk shows, etc. Soon so many more people will find out what his fans are so “crazed” about. Congratulations, RS!

The world premiere of “Ricki and the Flash” is next Monday and I have a screening pass in my hand – whoo hoo! What a great way to start my birthday week!

The New York Premiere Screening of “Ricki And The Flash” is on Aug. 3 and the press junket for the film is Aug. 1-2. Rick Springfield, Meryl Streep, Mamie Gummer and Jonathan Demme will all be there and reporters will get to interview all of them. Pretty exciting, right?

The Aug. 3 screening pass in my hand is not, unfortunately, for the one in New York – it’s  for an advance screening on the other side of the country in Phoenix – but I’m still excited nonetheless. (Oh, did it I make it sound like I was going to New York? Well, a girl can dream, right?) I think the last time I was this excited about a movie was back in 1984 when “Hard to Hold” came out.

Before I started this blog last August, I had lost touch with what RS was doing over the years. So sometimes I find an old interview and catch up. Tonight I found one from June 11, 2014, around the time his “Magnificent Vibration” novel came out.

At the time the interview was published, he was still planning his Australian tour for fall 2014 and “True Detective” and “Ricki and the Flash” were not even a twinkle in the casting directors’ eyes (or maybe they were, I don’t really know but the news of him being in “Ricki” was announced Aug. 6, 2014 – a year minus one day before the film’s release date).

Anyway, once he got the part in the film, he had to cancel his Australian tour, which disappointed a lot fans down under. But the opportunity to be in a film starring Academy Award-winning Meryl Streep was just to good of an opportunity to pass up.

I don’t mean to bring up any hard feelings, but my point is, the rest of the year changed since the time of the interview.  It reminds me of the saying, “Man plans and G-d laughs.” We can make our plans and even work diligently on them, but we never really know how it’ll all turn out. RS is such a good example of this. Fortunately for him, his changes involved wonderful opportunities and hopefully that will continue!

Oh, and I came across this interview tonight, too, on The Australian Morning Show on March 5, 2014 (a year and two days before I saw him for the first time in 15 years). He slips into his Australian accent a little, which is cute.

Whoo-hoo, so excited! (It’s coming out on my birthday week – happy birthday to me!)