Instead RS was Pastor Charles on “American Horror Story: Cult,” which is a horror anthology TV show and not something I’d usually watch. But I thought I’d give it a try tonight to see what RS’s character was like. 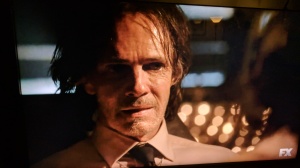 The episode, “Winter of our Discontent,” was creepy, as I had expected. I didn’t take a photo of the last scene – too gruesome – but it did remind me of RS’s injured rib.  He may not remember how he hurt his rib, but now we know. (Just kidding.)

He sure likes to play  creepy roles (think the freaky Dr. Irving Pitlor on “True Detective” in 2015 and Lucifer on “Supernatural” last year) and he’s disturbingly good at it. (Could this be a hint of what his upcoming new CD “The Snake King” is going to represent, some kind of creepy character?)

Fortunately there was a good character in the mix these past few years (Greg from “Ricki and the Flash.”)

Ricki and the Flash

Now I need to erase the image of Pastor Charles from my head and think of RS in my favorite role.

There’s so much going on in my mind right now that I can’t sleep. Images of shirtless Rick Springfield from his concert at the Arkansas State Fair this past week are mixed with images of him playing the devil in tonight’s “Supernatural” episode.

The part of my brain that deals with everyday life – work, carpools, homework, parent-teacher conferences, housekeeping, grocery shopping, scheduling dentist appointments, bedtime routines, etc. – has short-circuited due to an overload issue so all I have left is the brain power to contemplate the awesomeness that is Rick Springfield.

Maybe it is a long-term effect of having my bedroom walls plastered with posters like this one:

I wonder if there have been any studies done on the effects of poster-covered walls on brain development during one’s formative years.

My actual bedroom wall, circa the early ’80s. The photo is so old that it has faded.

It’s quite possible that having someone’s face greet you every morning when you wake up and stare at you as you fall asleep permanently alters your subconscious mind. Especially when it’s supplemented with listening to that person’s music over and over again during those formative years.

That would actually explain a lot.

Why was I up so early watching demonstrations about indoor/outdoor reversible rugs, a steam cleaner (with three kids and a dog, I REALLY wanted that), a paw print wind chime, a Trolley Dolly On the Go Cart,  a sleep tracker wristband, travel pillows and a Dell laptop?

Yes, right before a demo about a steam iron, Rick Springfield played “Down,” one of his songs off his new CD “Rocket Science.” The song is the official new theme song for the “Sundays with Carolyn & Dan” show on QVC.

The reason I woke up early to watch it rather than record it is because we don’t watch much TV so we don’t have the DVR add-on and I didn’t want to miss it. So I recorded it with my phone instead (as a throwback to when I used to record songs off the radio with a tape recorder, I guess). Here it is, although there’s some weird clicking sound, I’m not sure what that is.

After the performance, he did a live chat and performance on Carolyn Gracie’s (the Carolyn of Carolyn & Dan) Facebook page. (I didn’t record this one, but I found it on YouTube.)

He mentions that he only got a couple hours of sleep the night before. Although he doesn’t mention why in this interview, there were reports on social media that the flight he was on the night before was diverted due to issues with the bathroom. But as if that wasn’t enough, there was reportedly a large group of preteen girls on the plane who recognized him and started singing a few rounds of “Jessie’s Girl.” Some of the girls got their pictures taken with him and on Twitter somebody posted a video clip of them singing “Jessie’s Girl” on the plane.

Awww, is that cute or what?

If I lived in New York
I would make a big sign that says “Today is my birthday”
And I would stand outside the “Today” studio tomorrow.
Then maybe Rick Springfield, who will be on “Today” tomorrow,
Would see it and maybe I would get a hug or a selfie.
But I do not live in New York
So I will watch “Today” on TV tomorrow
But I will not hold a sign.

(Since this blog is dedicated to my 12-year-old self who would have written something like this if there were blogs in the ’80s, I thought it would be appropriate to throw this in, although I realize it’s cheesy…)

This past weekend I discovered that Netflix now has “Californication” available so I found out which ones Rick Springfield was on and watched all four of them. He plays himself on the show, or as he describes it in an interview on Showtime, a “twisted version” of himself. And the character is quite twisted, very raunchy and narcissistic, always listening to his own songs and name-dropping his own name (throughout the show the other characters only use his full name). He also says in the Showtime interview that his character is a version of himself in his 20s and 30s when he was in the height of his celebrity. I’m guessing that it was a fun character for him to play.

It’s funny how the this whole crush-dom works. If that was indeed how he acted in his 20s and 30s – it would have been around the height of my RS crush (his early 30s). What would my 13-year-old self have thought had I met him then? (Although I’m sure he would have been very sweet to me at the time, as I was 13 with braces and not quite the groupie-type that he would have used his charm on). That personality type is a big turn-off so perhaps the crush would have ended at that point.

But in recent interviews, he seems very down to earth and thoughtful and not at all narcissistic or shallow. So the crush continues…

P.S. For those who are interested, the shows are in season 3 (2009): Verities & Balderdash, Glass Houses, The Apartment and Mr. Bad Example.