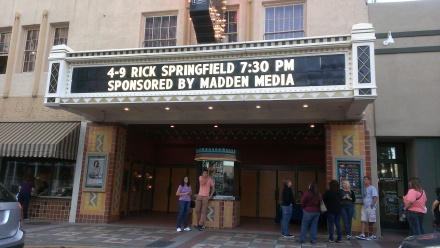 Wow! The Stripped Down show at the Fox Tucson Theatre last night was so great! It was a whole different experience than last month’s full-band show. Just Rick on the stage with his guitars and, for some songs, a “band in a box” (prerecorded musical accompaniment – both instruments and vocals – all done by him and saved on a laptop). The show really showcased his amazing talent, both musically and in connecting with his audience.

The guy who handles the video background of pictures and other images for the show wasn’t able to get out of New York because of the weather so it was literally a one-man show. It felt almost more intimate that way, as there wasn’t any distractions. (Although the video screen that featured family photographs, shown on the Yahoo live-streamed show, was great, too.)

He also addressed his recent hand surgery – he had a cyst that needed to be removed – and he said that his left pinky was numb so he wasn’t able to play guitar with it. When he told the story, female members of the audience responded with an “awwwwww,” which he joked about for the rest of the show, throwing in a “my pinky is numb” here and there, which received follow-up “awwwww”s. Despite his numb pinky, he still rocked!

Perhaps it comes from his acting experience, but he’s really good at improvising. For instance, when a moth flew around him on stage, his reaction was hilarious. In addition to naming the moth – Mothy – he also shared that when he finds spiders in his house, he’s the type that puts it in a cup and brings it outside, which he said drives his wife crazy.

“My Father’s Chair” was a huge highlight – such a powerful song, especially when he sang part of it without a mic and his voice still filled the room.

As is the norm with the “Stripped Down” shows, he came back to the stage after the show for a Q and A. I stood in line although I hadn’t decided on a question yet. We ran out of time before it was my turn, which was OK. Right after the moderator said that people can only ask questions and it wasn’t a time to ask for autographs or for photos, the first person to speak said, “Hi, Rick. I don’t really have a question, but can you sign my book?” He also got “General Hospital” questions and “Do you remember this one show in 2001…” type of questions. Most people’s voices quivered a little bit as they asked their question or said their statement, which I can totally identify with. (More about that later.) He was so nice and gracious and funny in his responses.

Anyway, it was a really incredible show and I felt really grateful that everything worked out the way it did so my husband and I could be there.

I thought that since I met RS after the last concert, I could easily leave after this one, but that wasn’t the case. After all, we drove nearly two hours to get there and when would I get another chance to be in the same proximity as RS? After we started walking to the parking structure where we parked, I told my husband, “Let’s just go to the back of the theater.” He thought I was joking. I wasn’t.

We walked around the block and some people were hanging around at the back of the theater. My husband wasn’t comfortable just standing there so I said, OK, let’s go get the car, come back here and park and try a little later. He’s probably doing the Meet and Greets now so it will take some time. (As if I’m an expert at this now).

So on the way to the car, he still thought I was joking. I wasn’t. I said we’ll just hang out by the exit and see if he comes out. He told me it sounded kind of creepy and stalkerish. “Nah, he’s used to it,” I replied.

So because my husband is awesome and knew how much this meant to me, he went along with it. But he didn’t want to park on the same side as the exit because he thought it was weird that we’d sit in a car waiting for RS. So we parked in front of the theater and walked around the corner. We sat on a bench where I could keep an eye on the fans already gathered at the exit and once they started walking toward the exit, I figured it was time so I grabbed my husband and we went over there. And sure enough, standing there was RS! He looked so much more well-rested than after the last show, probably because this was the first show in the tour instead of one toward the end after being sick for weeks.

My RS hug picture, where I look either tipsy (I wasn’t) or like a nutcase (I don’t think I am).

His people looked a little concerned that we were there (there were about 12 of us there), but they were nice about it, saying only that they were headed to get something to eat (it was about 10:30 p.m. at this point). So, being extremely gracious and kind, RS posed for a few photos – one with a whole group, one with one person and when it was my turn, I immediately turned into a babbling idiot. I said something like this: “When I met you last month, I didn’t get a chance to tell you, and I know this sounds crazy, but I wrote a blog about you.” He laughed a big laugh and gave me a big hug. My husband snapped a couple of photos and RS looked great but I looked either a little tipsy (although I didn’t drink anything but water) or like a complete nutcase.

I’m not quite sure if the big laugh was because of the fact that I would write a blog about him or because he’d read it and thought it was funny but I prefer the second option (although that’s probably delusional).

But RS, if you actually do read this: Thanks for being so kind, even to fans who come across as complete idiots. Hope you had a nice dinner and wishing you safe travels and a complete recovery for your hand. Thanks for putting together the Stripped Down show, it was really an incredible evening!

2 thoughts on “What an amazing show (and another brief meeting)”